We lived in various towns and cities in Utah, California and Colorado before moving to the Upstate of South Carolina in 2008. College football was never a big deal in any of those places we lived before South Carolina. There were teams in all of those places and fans, of course, and a newspaper article about each of the games, but college football was not really part of the culture or something we talked about very much. 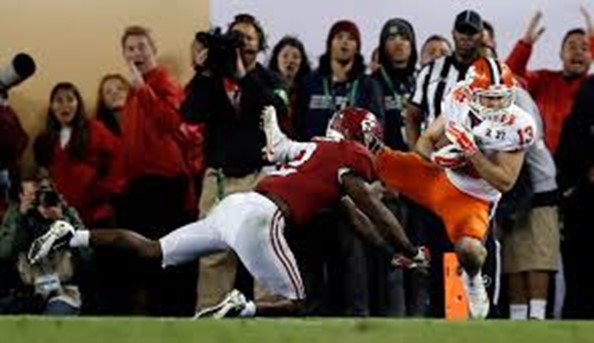 The first thing I noticed when driving through Clemson when we moved to the Upstate was orange tiger paws painted on the road in various places and bank buildings painted orange and purple. Our first Sunday attending worship at the Clemson Church of Christ there were several church goers wearing Clemson orange shirts. We lived in adjoining towns to Clemson while in South Carolina for eight years. We quickly found out that Clemson football was not only a serious part of the culture, but maybe more accurately described as a religion – lol.

We were quickly drawn in to the fandom and spirit of things – the excitement and community closeness associated with Clemson football is part of what made our 8 years in South Carolina memorable and special. We were able to attend several games in the stadium called Death Valley while living there – it’s an experience – the crush of people and excitement on game day with 80,000 in the stadium and tailgaters in every square inch of space surrounding is overwhelming. We moved away from South Carolina in early September, but we’ve found ourselves searching out the Clemson game on TV each week all season and cheering them on. We hope it is OK to still be Clemson Tiger fans even though we moved 1,600 miles to the west.

Dabo Swinney became head coach at Clemson in mid-season the year we moved to the Upstate. Since then he built a program that seems to radiate positives in lots of ways. Institutions often disappoint me with the ways they wield and sustain power. Not so for Clemson football – the sense in the community is that it operates with a true regard for the good of the players, the university and the community. It’s a program about winning, but it seems guided by core values that are held in higher regard than winning. I always liked that, and I hope that assessment is true.

So, it was really exciting when Renfrow caught that 2 yard pass from Deshaun Watson in the end zone with 2 seconds left for the game winning touchdown Monday night. Wow – national champions. Best of all it just feels like they deserved the win and the championship. Congratulations Clemson Tigers – from two fans way out West.

One thought on “college football”