8 The whole earth is filled with awe at your wonders;

where morning dawns, where evening fades,

you call forth songs of joy.

There are so many natural wonders to see and appreciate in this nation of America. As the Psalmist expressed, I too, respond with awe and a song of joy in my heart to so many of those wonders. Southeastern Utah is one of those places that I keep returning to because of the beauty there. I got up and drove the canyon road along the Colorado River east from Moab, Utah last Saturday morning at dawn hoping to get some pictures of red rocks in the morning light. As fortune would have it, the skies were full of low hanging, grey clouds. The pictures didn’t turn out well, but nevertheless, I’ll share a couple showing this magnificent landscape that adorns this area I love.

We traveled to Moab, Utah and spent last weekend for their annual custom car show. It was a reunion with a town and area missed greatly during the eight years we lived in the East. Moab is in Southeastern Utah in the middle of red rock country. The sandstone rock formations that arise out of the high desert floor and in bluffs and ridges throughout all that area in Utah are a spectacle of beauty to me. Arches National Park lies just north of Moab and Canyonlands National Park sits to the West and extends both north and south for an extended distance. To the east of Moab are the high peaks of the La Sal Mountains which are usually snow-capped through the end of May. The Colorado River runs by through sandstone canyons from the east on the northern edge of town – it is popular with rafters and jet skiers in the Spring and early Summer months. A Utah designated Scenic By-Pass highway follows the river through the canyons and rock formations for 25 miles out of town, and eventually crosses the desert and connects to the east in Colorado with Interstate 70. There are campgrounds along this stretch of river and 2 resorts which are very popular. Despite the tourism, the ruggedness of the landscape takes center stage. It’s my favorite 25-mile stretch of road anywhere. I’ve ridden it innumerable times in autos and on Harley Davidsons when visiting from Grand Junction, CO where we lived for 25 years. 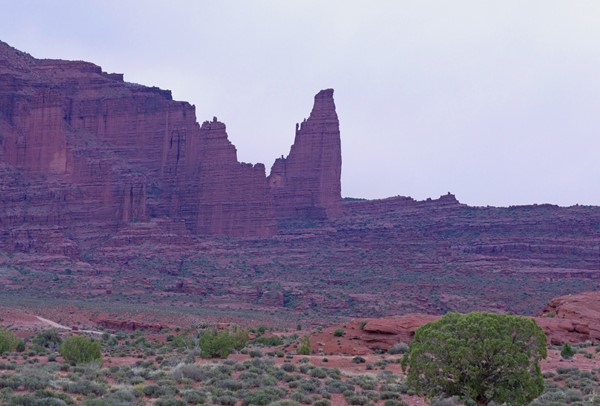 The wonders of Southeastern Utah extend many miles both west and south from Moab. Far to the West is Capitol Reef National Park near Torrey, Utah. Driving south out of Torrey on Highway 12 over an alpine forested mountain the road drops back to the desert through Boulder and Escalante which sit to the West of the Grand Staircase – Escalante National Monument. Darlene and I drove south from Capitol Reef on dirt roads through part of the monument one day 12 years or so ago. It is amazingly vast and beautiful and undeveloped. I hope my great-grandchildren, yet to be born, can drive that same dirt road many years from now and experience the same sense of awe I felt that day. Further south on Highway 12 is Kodachrome Basin and further is Bryce Canyon National Park. The diverse beauty of the forest and rocks and desert on the 110-mile drive from Torrey to Bryce is unparalleled in my travels. Car and Driver Magazine had an article years ago that named Utah Highway 12 as the greatest road in America. There is never a stretch on the twists and turns of that road when there is not something that draws your eyes and interest. I would have to agree with the magazine.

Driving south from Moab are the towns of Monticello, Blanding, Bluff and Mexican Hat. They are very small towns. At Mexican Hat the San Juan River is crossed and a few miles beyond on the Navajo Reservation is Monument Valley. We spent over 2 hours one blustery, Spring day in 2007 on a ridge in Navajo Park with a camera taking picture after picture of mixed shadows and light racing over 3 huge monoliths in a vast desert valley that the ridge overlooked. I’ll never forget that afternoon. Monument Valley always stirs a spiritual sense within me. I’m not at all eccentric in regard to metaphysical things, but nevertheless, something always stirs, hauntingly within me when venturing through that valley. We took a slight detour on our drive home from Moab last Sunday driving south all the way to Bluff, then taking a road East through Montezuma City and Aneth, both just wide places in the road, connecting with the highway south to Shiprock and Gallup just east of the Four Corners.

Bluff, Utah has a population of 500 people, more or less. A highway which is busy with tourists goes directly through town, but it is not a place where many spend either the night or very much time. The town is in a valley carved out by the San Juan River surrounded by sandstone cliffs and bluffs – hence the town name – some of them 300 feet high on each side. You can see them behind the photo of the café. At the north edge of town is a little café, the Twin Rocks Café – we happened to stop at it years ago on a drive from Flagstaff, AZ to Moab. We were pleased with the food that stop and since have tried to plan a stop when in the area. Over the years, it has developed a kind of foodie menu with a number of breakfast items unique and interesting. We stopped last Sunday morning before heading east to the Four Corners and ordered Eggs Manuelito and some fry bread. The dish was plated with two good size fried potato cakes which had been encrusted with blue cornmeal. On top were eggs to order and then some melted cheese. On top of the melted cheese was a small amount of apricot based jam with a hint of chile and something acidic – maybe a touch of balsamic. Then on top of that were chorizo sausage crumbles. It was very good and tasty. The fry bread was light, nicely browned without being grease soaked. There were several other breakfast menu items just as interesting. Who would expect that at a little café out in the middle of nowhere in Southeastern Utah.

My perspective of the wonders of a landscape such as those in Southeastern Utah are influenced a lot by faith in a God as Creator and Caretaker of all that is seen. The horrid evil in the world does not challenge that faith for me. A perspective that includes belief in an over-arching purpose for all that exists in both the beautiful and good things and the unbeautiful and evil things, provides a sense of peace and acceptance with all. An encounter with the wonders of a drive through Southeastern Utah enforce an optimism that reverence for all that is creation will one day see that over-arching purpose fulfilled in an eternity where only the beautiful and good remain. Spending time enjoying the wonders that are all around us renews such faith and optimism.

2 thoughts on “Moab and Southeastern Utah”