We had a few timeshare points left to use for 2018 – enough to get a nice 1-bedroom unit for 3 nights in Flagstaff, AZ. We’ve been visiting Flagstaff since the early 1990s. It’s a small town, but one with a lot of energy – it’s the home of Northern Arizona University and draws a lot of tourists because of its proximity to the Grand Canyon and Sedona. We return here again and again and always have a good time. It sits at 7,000 ft. elevation with the San Francisco Peaks looming over town and is located in a forest of Ponderosa Pines near the Mogollon Rim. It is not at all the normal Arizona desert that you think of – we arrived this visit to a fresh layer of snow on the ground from a storm that went through over the weekend. 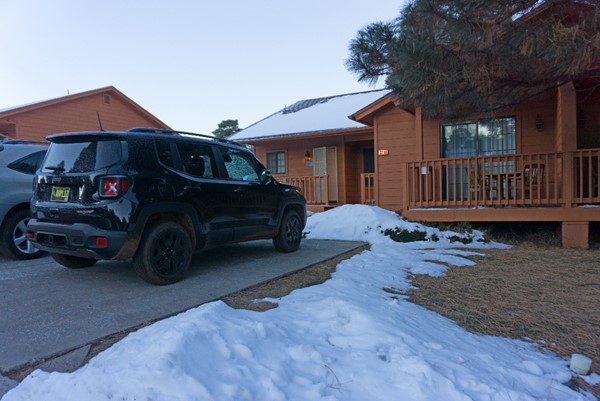 We got up early Tuesday morning and had breakfast just up the street from the timeshare at the Toasted Owl. Then we headed for Sedona – down the steep, twisty, famous Oak Creek Canyon to a Jeep trail I had picked out. Sedona is red rock country and in the descent of 2,500 feet from Flagstaff the terrain turns from Ponderosa forest to Pinyon Pine, Cedars and brush. It was 15 degrees warmer in Sedona and none of the snow from the storm remained on the ground. 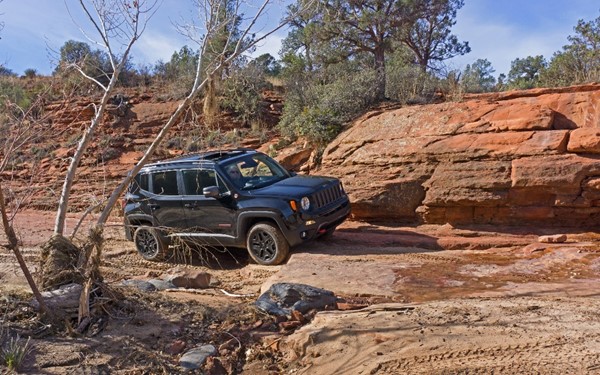 We’ve had the Jeep Renegade for a couple months. It’s a tiny thing with a 4-cylinder engine. It does have a sophisticated Jeep 4-wheel drive system with a low range and even a hill descent function. I know it is built in Italy which is blasphemy for a Jeep, and it is not a Wrangler, and doesn’t have a lift kit, and it doesn’t articulate much. But we have had it on twisty mountain roads in snow storms with slick roads twice already and selecting 4 wheel-drive on the fly has made it rock steady. So, I wanted a chance to put it in 4-wheel low and crawl over some rocks and see how it did. I had chosen a trail just outside of Sedona to the Van Deren cabin ruins. It’s a trail of 3 miles, rocky from beginning to end. Most of the trail is low 4-wheel drive and a slow go. It doesn’t require big clearance or areas where wheel articulation is necessary, but the last ¼ mile is particularly steep and required accurate wheel placement on rocks in several places. The picture above is in a dry creek bed with some steps just before the final difficult section. If you look close you can see Darlene behind the steering wheel. I was out taking pictures and guiding her for wheel placement to ease up that little rock ledge. The skid plates scraped a couple of places on the trail, but never hung up. We had a good time and the Jeep was just great. It will get us through snow storms and up trails we haven’t been able to negotiate since trading away the Jeep Commander when we moved to South Carolina. 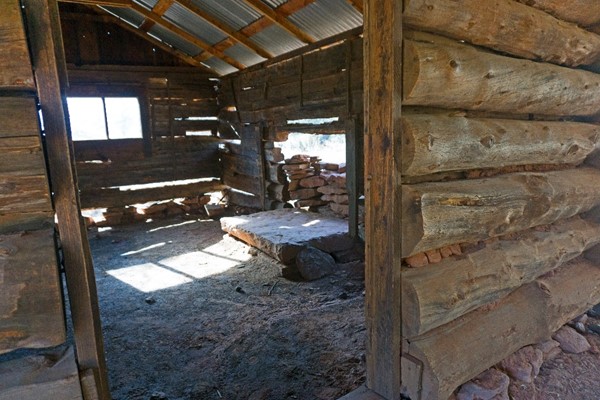 The Van Deren cabin shown above was built in 1924 – not sure when it was abandoned. We saw a coyote crossing the dry creek bed. Between the cabin and where the Jeep was parked a couple of Javelina crossed just ahead of us. Look closely in the center of the picture below and you can see one of them.

Javelina look like pigs but are not in the pig family. They are about 4 feet long and weigh 50 to 75 pounds. They are not related to the razorbacks which are plentiful in parts of the Southeast. We see them occasionally when in and around Sedona.

We decided to go back to Flagstaff up Snebly Hill Road rather than back up Oak Creek Canyon. It was another slow go often in 4 wheel low – a rocky dirt road 17 miles long – steep in places – it tops the Mogollon Rim after 11 miles and then through the forest connects to I-17 which is the freeway from Flagstaff to Phoenix. It has many spectacular views looking back down on the red rocks of Sedona.

Over the last 30 years we’ve been fortunate to take several short trips each year throughout the West and were also able to see a lot of the East while living in South Carolina. There is so much to see and enjoy within just a day or two of driving. This trip was typical – a few days away – some sightseeing – a break from the routine – some good food in new restaurants. Politicians talk about good times and bad times – ½ of them are always telling us times are good and the other ½ want us to believe we need change because times are bad. What we experience over my lifetime is that nothing much changes regardless of the agenda of those in political power. Life goes on for most regular people in America, and when we think about it, we have been incredibly blessed with mostly good times for all of my lifetime. These little trips we take full of beautiful scenery, and with family sometimes, and with small adventures on days like today prove that we are fortunate to live in this great country. We should vote and care about and discuss the issues some and work hard to do our part, but the nastiness and vitriol doesn’t help. A drive or a walk on a red rock trail – the grandeur of creation – getting a picture of a javelina irritated that his walk was interrupted – all these things give a perspective that allows living with a smile, with contentment and with hope.

We finished the day sharing a great Italian sandwich with some spinach dip and a gooey, ice creamy, fresh baked, hot, macadamia nut/chocolate cookie. Maybe things are too good – might have to watch what I eat for a few days when we get home to get a couple pounds back off.