We were able to get away for 6 nights last week for a trip to San Antonio – two nights on the road and 4 in a nice timeshare unit right in the middle of things downtown. San Antonio is a mixture of the old and the new. The skyline photo taken from our balcony looks like many modern cities – right in the middle of these big building downtown, though, is the Alamo, one of the most famous historical American icons. 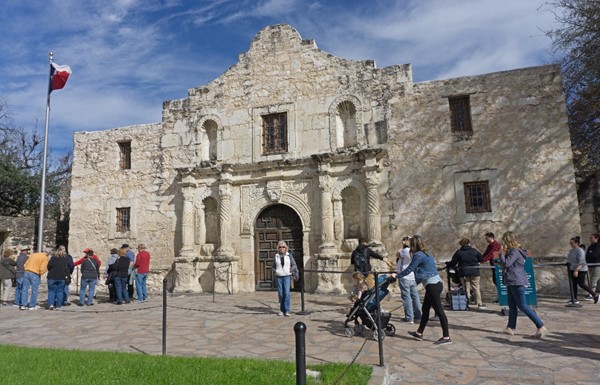 The Alamo was a Spanish mission in 1836 occupied by a small group of American immigrants to this territory of Mexico along with some Mexican citizens who desired joining in rebellion against the central Mexico government. History calls the group which desired independence from Mexican rule the Texians. In February 1836 Mexican general Santa Ana brought his army to Texas to put down the rebellion and in early March he defeated and executed those who made a stand at the Alamo. Some of those rebels like Jim Bowie and Davy Crockett are names immediately recognized with folklore of their heroism in defeat. By the end of April 1836 the Texian rebels led by Sam Houston had regrouped and engaged Santa Ana’s army and over the course of just a few days defeated it. Texas became an independent republic and then in a few years joined the United States becoming the state of Texas. The city of San Antonio developed around the site of the Alamo and today has a population of 1.5 million. It is a great place to visit, rich in history with much to see and do. 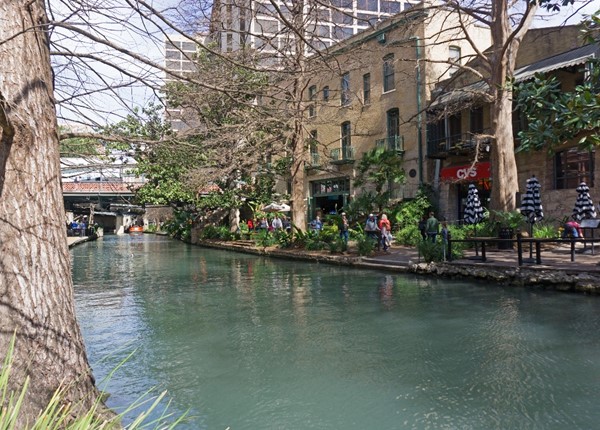 The San Antonio River runs through the city and was developed years ago into what is called the Riverwalk. Walkways line both sides of the river which are beautifully landscaped with restaurants and shops in the most developed part of it. The Walk and the river run a full story below street level. We spent a morning at the north end of the Mission Reach Riverwalk extension known as the Pearl district. It has been developed around the historic Pearl Brewery established in the 1880s. There are shops and restaurants, landscaping and art with this old brewery at its center – a modern development with a focus on a beautiful old historical landmark. Following are 2 photos of the old Pearl Brewery. We also spent a rain day walking around the historic settlement of Gruene, 35 miles northwest, visiting antique stores and little tourist shops. No photos of Gruene in the rain. 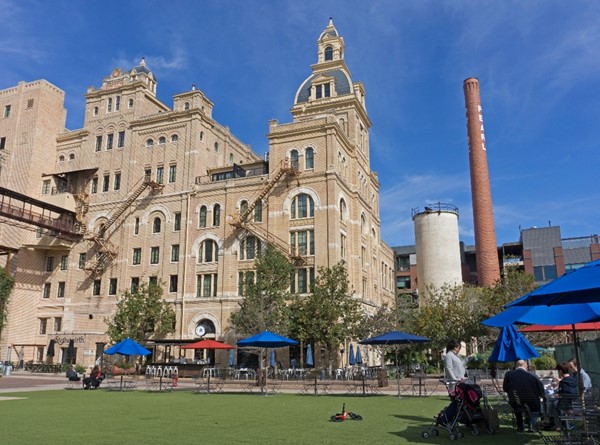 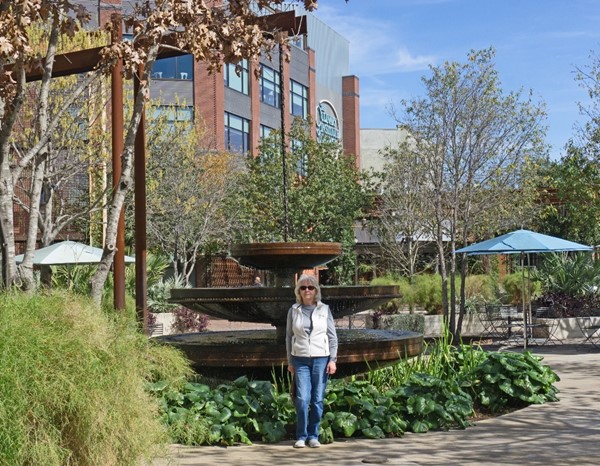 San Antonio was the site of the 1968 World’s Fair – the Tower of the Americas was built for the event. It is 750 feet tall with a Chart House restaurant at the top which continuously rotates 360 degrees giving huge, ever changing views of the city and surrounding area. Wyndham Timeshares offered us free dinner at the Chart House on the Tower if we would attend a sales presentation for a couple of hours. We usually decline these presentations, but the offer of dinner up on the Tower at a Chart House was more than we could refuse. We did refuse to purchase more timeshare points, however. Over the years we’ve eaten at several Chart Houses around the US. They’ve always been great and always strained the budget. They are best known for their seafood items, but Darlene and I are always a sucker for the prime rib – it was great. For other meals we ate breakfast twice at a café part of a historic flour mill and home built by a German immigrant in 1860 along the banks of the San Antonio River named the Guenther House. It has the best biscuits and gravy ever. We also ate some great pizza cooked in a certified Neapolitan wood fired oven at a restaurant named Dough. You might be thinking we like vacations best because of the food. 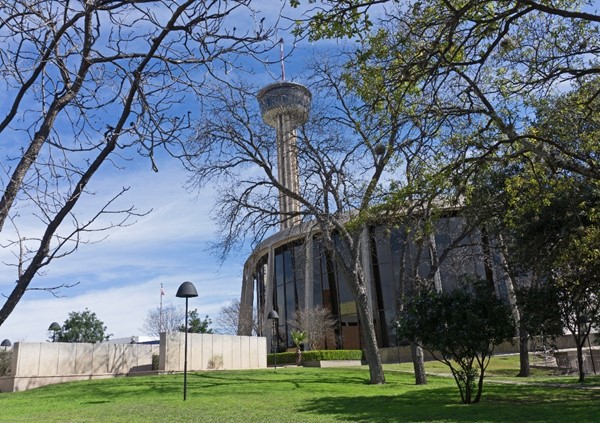 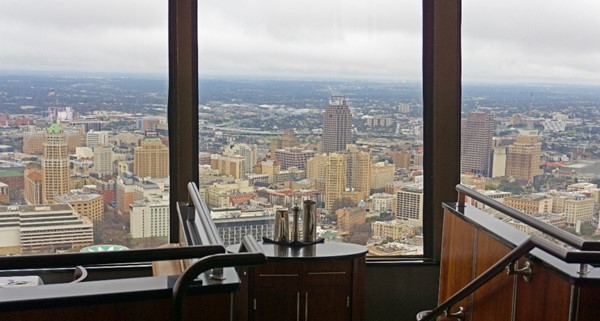 The Texian rebellion stand at the Alamo was over 180 years ago. The Guenther Flour Mill was built 150 years ago. The Pearl Brewery was established 130 years ago. The Riverwalk was originally built 70 years ago. The Tower of the Americas was built 50 years ago. All these historic things are on popular display in a Texas city which prides itself, as do many cities like it, with being modern and keeping up with the times. We know time marches on relentlessly – yet we hang on and treasure the best things from history while embracing the future. Certain things are timeless and continue to interest us and bring joy. We visit a place like San Antonio and have a good time revisiting history at the same time we live in the technology of the present, keeping up with client emails on our computers, keeping up with friends activities on social media, searching out the best restaurant deals on the internet, and driving to all these places using a GPS screen built into our autos which knows where every address in the U.S. is, and guides us there with a nice lady’s voice telling us when to make a turn. We live in amazing times.

We each appeared in this world in the middle of a history that had been going on for a long time – in the middle of current events we didn’t shape, in the middle of parents lives which were already in process with careers and social connections and agendas. We get that – that we develop a way to fit into a world we were dropped into the middle of – a world rushing onward at the same time we were taking our first breath. We accomplish fitting in by embracing all the various forces which intend good and which shun evil. The cultural and historical diversity of a city like San Antonio is part of its force for good and is its fiber – the thing that makes it interesting and resilient and which define its character. We walked all over downtown San Antonio for 4 days – always felt safe – always felt welcome. We live in a political environment in which some are attacking our appreciation and our embrace of the greatness which has developed out of and is because of our own national diversity. San Antonio is one of those cities which display on every corner the good which can come from cultural and historical diversity. The recognition of our own nation’s successes from embracing our differences encourage us to beware of those who would consolidate, and limit, and keep things as they are or advocate a return to the past. Our own historical experience teaches us that diversity harmonized by a common desire to create and maintain good is strength, and vitality, and results in the future being like the City of San Antonio of the present – a city which rose out of defeat at an old Spanish Mission – a city which rose up powered by a vision for good, and based in the efforts expressed by people, who though differing in their cultures, united in a cause for good expressed in the simple resolve to remember the Alamo. It is the willingness to unite in a cause for good which makes a nation strong – the diversity of its cultures willing to unite make for strength and accomplishment in that cause.